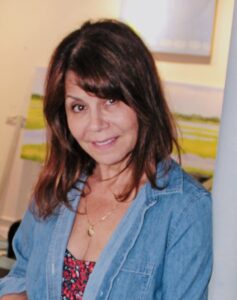 Casey Chalem Anderson is a Greenwich Village native who passionately creates oil paintings of the idyllic Hamptons landscape. Whether it’s majestic ocean waves, tranquil salt marshes or fields of flowers bursting with color, Chalem-Anderson paints to express the timeless beauty of nature at the beach that surrounds her.

As a child growing up in New York City, Chalem-Anderson’s parents took her to Greenwich Village poetry readings, gallery openings, dance recitals, avant-garde theater presentations and museums. So it was no surprise when she began to paint seriously at the High School of Art and Design, N.Y.C., also studying figure drawing at the Art Students League.

Chalem-Anderson participates in many Hamptons benefits like the Cigar Box Art Auction for the East End Hospice, Sag Harbor Partnership, the local Surfrider Chapter, the Peconic Bay Medical Center, and the Southampton Hospital. Chalem-Anderson also helped to create Plein Air Peconic, an independent artist group that works with the Peconic Land Trust to protect the land and water that is so essential to her paintings. She helps produce the group’s annual art exhibitions and coordinates painting outings at conserved sites.

Chalem-Anderson has a B.A. in Practice of Art from the University of California, Berkeley (1986).  She has taught at the Parrish Art Museum, Southampton, Guild Hall, East Hampton and privately in her Sag Harbor Studio. She received a National Endowment of the Arts Special Opportunity Grant in 1998 and in 1994. She received a Jane Winslow-Guggenheim Residence Grant in Woodstock, NY.  One of her first jobs was at the Metropolitan Museum of Art NYC in Native American artifacts.

Currently her paintings can be seen at the Romany Kramoris Gallery, Sag Harbor, NY and at the Reboli Arts Center Stonybrook, NY