Three formidable realist painters—two of them well-known modern artists and a third who’s currently active in the East End art community—bring the great outdoors into the inviting llle Arts gallery space in a summer show that prompts a happy response. Both Fairfield Porter and his protégé Neil Welliver have secured their places in the story of American art, but the show is very nearly stolen by the windswept seascapes of Casey Chalem Anderson, herself a force of nature in The Hamptons cultural scene. 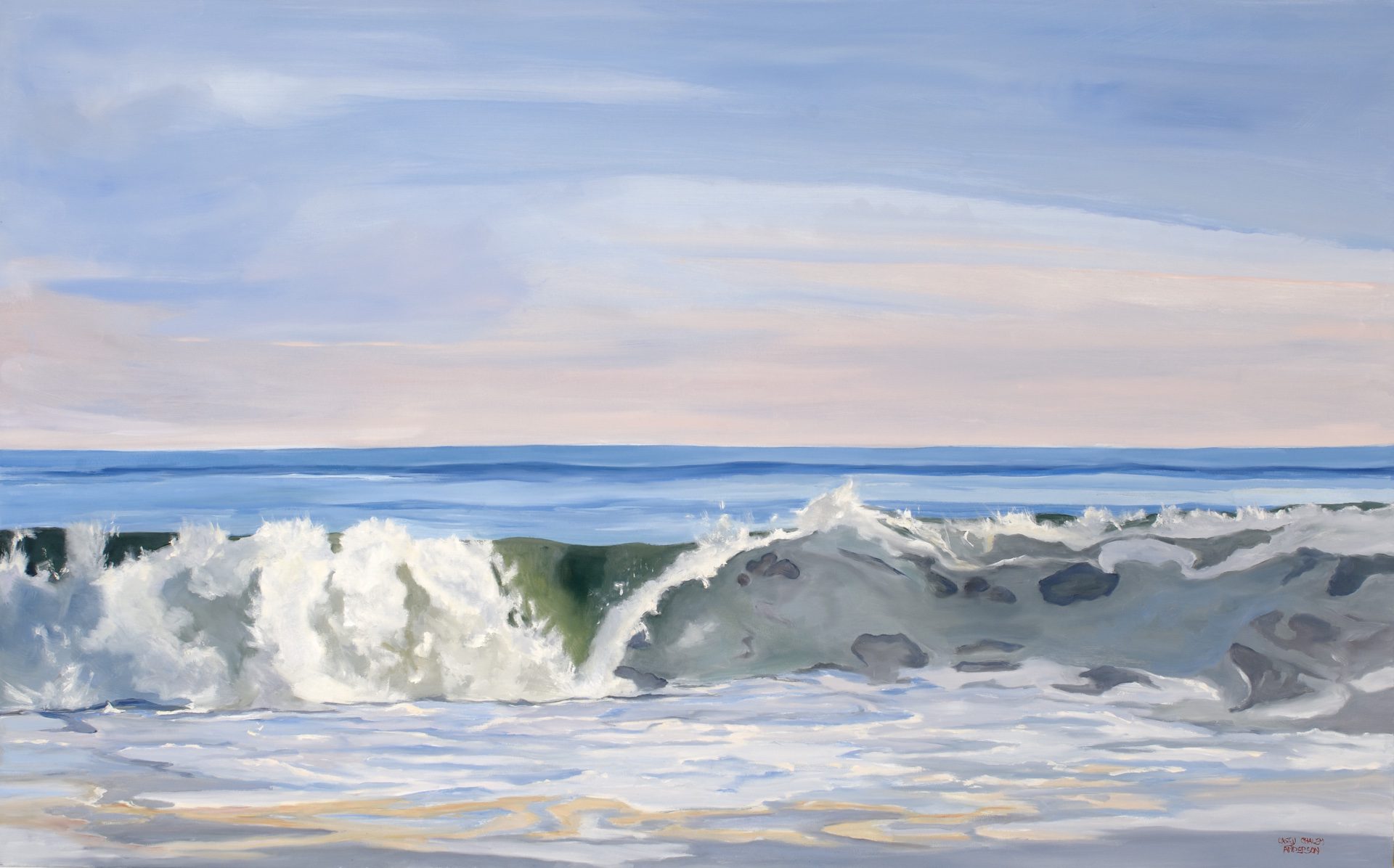 The large-scale seascape is a genre that tests the mettle of artist and viewer, a challenge to stylistic invention and intimate looking. Anderson trains our “spindrift gaze” (to borrow a phrase from poet Hart Crane) on the Atlantic rollers, truly one of the most challenging subjects for tight realistic rendering, and the rewards of looking close are in the details.

A loop of white foam caught in the curl near the middle of Wild Ocean, for instance, is my favorite moment in Anderson’s momentous paintings. Over a line of rich blues near the bottom, the artist has layered a syncopated band of swirling whites and browns (the breaking waves) that have all the rhythmic and gestural dynamism of a dance floor.

Anderson grew up in Greenwich Village in New York City, enjoying as a child a heady mix of art shows, readings, dance recitals and theater evenings. After the High School of Art and Design and life drawing classes at the Art Students League, she took her bachelor’s in art at U.C. Berkeley, where her teachers included Elmer Bischoff and Joan Brown. She lives in Sag Harbor and helped found Plein Air Peconic, a group of “artist ambassadors” who support the Peconic Land Trust and have mounted terrific annual shows on both Forks of eastern Long Island.

At Ille Arts, a superb group of her pen and ink drawings rapidly made in various corners of the East End skitters with the kind of energy heard in a string quartet by Czek composer Janacek, lightness combined with incisiveness.

Both gracious and intelligent, Anderson is a born teacher of art (she even taught Fairfield Porter’s daughter) who offered me this rich insight as I was considering the choreography of her compositions: “They’re as thoughtfully designed and specific as if I were carving it in wood.”

I took that thought around the room with me as I continued to view her work, but also that of Welliver, who pieces together blocks of color in a way that suggests a jigsaw at work. Her comment was especially helpful for my appreciation of Welliver’s work, which posed an unexpected problem for me.

Ordinarily, I exhort viewers and students to move in closer on a painting, almost tight enough to sniff out its secrets and enter the stroke-on-stroke progress of its making. I was therefore surprised to find myself backing off from Shadow on Frankfort Barren, the largest of Welliver’s paintings in the show—although by no means his grandest scale: he liked to work on canvases 10 feet wide. I realized that the piece was vastly more satisfying when viewed from across the gallery.

The rhythms of the graded slope, punctuated by groups of rock outcroppings rendered in olive green in the snow, were more secure from several feet away, revealing a graphic strategy that rewarded distance. The painting is familiar ground for Welliver, who stalked his motifs on the 1,600-acre property in Lincolnville, Maine, where he moved in 1970. Born in Millville, Pennsylvania, Neil Welliver graduated from the Philadelphia College of Art and Yale, where he was a student of Josef Albers and started with abstraction, as many notable Albers students did, before taking a retrograde turn into realism when it was particularly unpopular.

Anecdote should never overpower interpretation of the visual experience, but I was reminded of the one looming narrative that is detailed whenever Welliver is on view. An awful barrage of catastrophes beset him beginning in 1975, when his home and studio (with much of his work in it) burned to the ground, followed in short order by the death of his daughter, then wife and, not long after, two sons. As I backed off from the work and thought of the winter day (a Maine cold, not a Long Island cold) and the way the paint must have slowed with the temperature as he worked outside, I could almost feel the chill.

A sunnier mood by far arises from almost any encounter with the paintings of the ever-popular Fairfield Porter, still warmly recalled for the generosity and intelligence emanating from his home in Southampton, N.Y. on South Main Street. The son of an architect and poet, the supremely literary Harvard graduate was an eloquent critic as well as mentor to many, including Welliver, and both of them had homes in Maine (Porter’s family had property on Great Spruce Head Island).

When Porter died in 1975, his friend the poet John Ashbery wrote a memorable obituary that concluded: “For his Promethean wresting of the arbitrary and individual back from the powers of dullness and for passing them on to those who knew him personally or through his work, we shall long be grateful.”

Ashbery’s poetry and Porter’s paintings share a pleasantly fluent abundance of inviting imagery that shifts as rapidly as daylight and shadow. A large untitled watercolor near the Main Street window of Ille Arts has all the “matter-of-fact” (a pet phrase of his) fidelity of his close observations of nature. Like Ashbery, and certainly like Welliver, this type of painting wanders from poetry to well-wrought prose.

By contrast, my favorite Porter in the current show is an almost Milton Avery-like impression of a sunrise, made in watercolor in 1974, that hangs demurely in a corner near the back of the gallery. Like a lyric by Mallarme, it seeks to put on paper not the sunrise itself, but the effect of the sunrise.

As a curator, I paid attention to difficult decisions regarding the juxtaposition of works by two long-established artists and a third who is emerging. There was a subtlety and equanimity to the hanging of the exhibition that was admirable. The art on view is discreetly arranged with meticulous attention to details of spacing and the intelligent eschewing of labels or wall texts; the beauty of this effort is that it made the curating appear to simply go away.

Many galleries and certain types of museums (often regional or university institutions) too often clobber the viewer with didactic exhibition design and pointed contrasts or comparisons. The more sophisticated and confident the curatorial team, the closer the final result is to the kind of discretion that respects the viewer while bordering on the withdrawal of overt guidance.

At Ille Arts, by mingling drawings and paintings by all three artists in a seemingly nonchalant waltz of thematic groupings, the curators avoided heavy-handed lecturing. In curation, Sara De Luca, who runs Ille Arts, teamed up with Eric Brown, former longtime co-director of Manhattan’s Tibor de Nagy Gallery, where works by Welliver and Porter have often been seen. Besides the curators, the press materials for the show also mention the support of Shelley Farmer of Hirschl & Adler galleries (another fine source for Porter’s paintings) as well as Sheila Geoffrion (Welliver’s third wife) as having a hand in gathering the works that are part of the show.

Connect To The Sea

Let’s stay in touch!
Be sure to receive invitations to my next show and events and Breath of Salt Air – an image and a few words to help keep you connected to the sea.