My Painting Was Stolen! 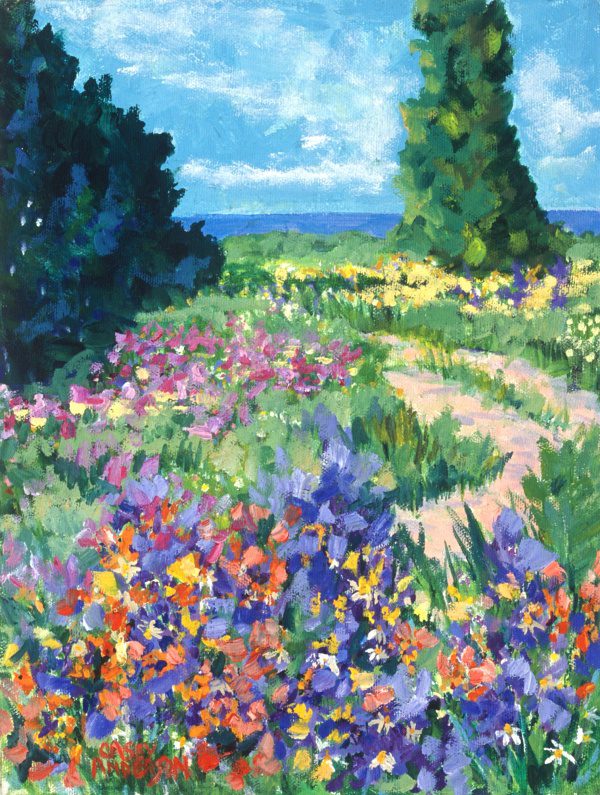 We were all still wearing heavy winter coats and it was Thursday, the day that Dan’s papers is distributed in stacks and bundles to every outlet in the Hamptons. I was having a show of my paintings at a small jewelry store on Main Street, Southampton. My painting “Flower Path” had been selected for the Dan’s Papers cover but who knew that happy event would soon be central to a crime.

Mary and I had always been friendly at the school where our kids went to nursery school. When the invitations were ready, I was sure to invite her to the show. I brought my paintings in to hang the exhibition and went home as the reception was planned for the up coming weekend. Mary, saw the Dan’s cover and since she happened to be in Southampton went in for a sneak preview. She fell in love with “Flower Path” and went home to discuss the purchase with her husband.

On Friday, Mary returned to the store ready to buy it but looked up to see a blank space where it had been on the wall. The proprietor of the shop got nervous. She didn’t know what happened, she hedged, where was the painting? Did this woman, my friend Mary in front of her wanting to buy it, take it? Since it was only the size of a large book, could it be under her coat? Shocked at the accusation, Mary called me. I went immediately to the shop. What happened here? A painting stolen in the idyllic safe Hamptons?

What about the security camera the police wanted to know? But just like an episode of Law and Order…..the film had run out. A few hours later the jewelry store got a phone call. The female voice on the other end said, ” …you can find your painting at the Cheese Village Gourmet shop, a few stores down the block. WHAT???  I walked right over there and sure enough, wrapped in protective foam and placed by the door in a white five gallon bucket was my painting. The people at the Cheese Store said they had no idea, they knew nothing.

I brought the painting back to my exhibition and it went back on the wall. Mary returned and purchased the painting.  The cover painting  that reminded her of a Monet.  She brought it home where it has lived safely on her wall in East Hampton for years. We never found out the real story behind the incident. The next week the crime appeared in Dan’s police blotter, giving me a 2 week run of publicity and contributing to a very successful show.

I hope you enjoyed this story,

All the best to you all in the New Year!